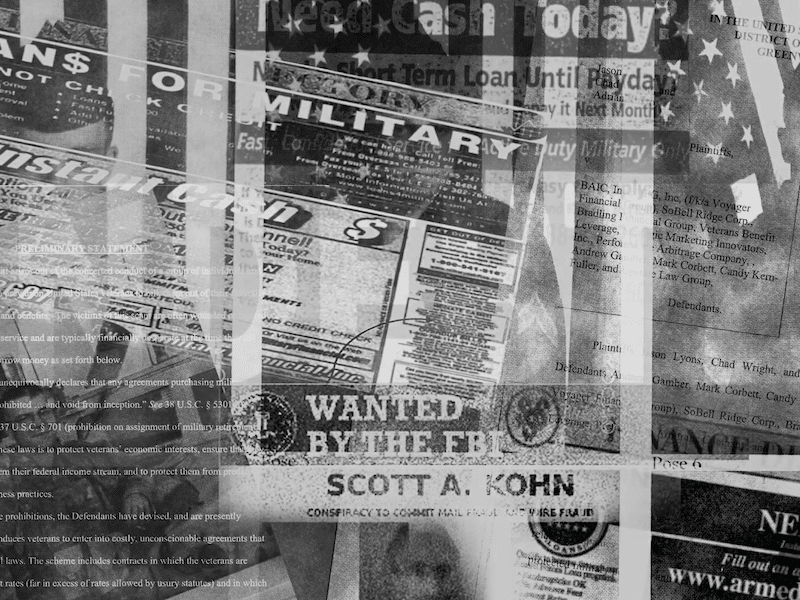 Posted at 21:18h in Blog by phil korosec
0 Likes
Share

Federal authorities have seized nearly $320,000 and two vehicles from Black Harbor Wealth Management founder Chris Dixon and his wife in connection with a criminal case highlighted in Indebted, the yearlong investigation by The Greenville News into the buying and selling of military benefits.

According to a court document filed last week, $240,119.63 was seized from Dixon’s annuity contract with American Equity Life Insurance Company on June 3. On the same day, $61,699.29 belonging to Dixon’s wife, Connie, was seized from a life insurance account and another $18,048.11 was seized from the couple’s joint account at South State Bank.

The same court document states that federal authorities seized a 2014 Maserati Ghibli and a 2016 Chevrolet Silverado from Chris Dixon on June 12.

Financial schemes have targeted veterans since before the internet in at least 33 states, but court cases in Greenville, SC, could mark a new era. Josh Morgan, Greenville News

The seizure of those assets stems from criminal charges against four former executives with a company called Future Income Payments, which provided cash advances from investors to financially struggling veterans. The veterans agreed to use their military disability benefits or pensions to repay the money at annual interest rates as high as 240%, according to allegations in at least one lawsuit.

Seven judges in six states, including South Carolina, have ruled that these transactions are illegal.

Records obtained by the FBI indicate 2,600 investors lost at least $451 million when Future Income Payments collapsed last year. Some of the people who lost money are former clients of Black Harbor, which was part of a nationwide network of 300 insurance agents and financial advisors that helped Future Income Payments find investors.

A federal judge signed an order Friday giving the U.S. Attorney’s Office until Feb. 3 to file a forfeiture action related to the assets that were seized from Chris and Connie Dixon. According to the order, Assistant U.S. Attorney Bill Watkins anticipates more charges will be filed in the Future Income Payments case within three months. The order notes that Chris and Connie Dixon are contesting the forfeiture of their seized assets.

Dixon couldn’t be reached for comment, but Dixon’s attorney, Benjamin Biard, issued a text statement to The News Wednesday:

“Mr. Dixon didn’t participate in the wrongdoing of FIP (Future Income Payments), has not been charged with any wrongdoing, and assisted the government in its efforts to prosecute FIP, Scott Kohn and actual wrongdoers,” Biard said.

Besides the seizure of assets, Chris Dixon and Black Harbor are facing six civil lawsuits in Anderson and Richland counties in South Carolina. The suits were filed by Columbia attorney Robert Rikard on behalf of 60 of Black Harbor’s former clients who allege that they suffered “devastating” losses when Future Income Payments folded. Most of those former clients live in Anderson, Greenville, Oconee and Pickens counties.

Chris Dixon and Black Harbor deny many of the allegations in Rikard’s lawsuits, court records show.

From 2016 to 2018, Black Harbor peddled a financial plan that included life insurance policies with a death benefit and a source of retirement income. Clients also were encouraged to buy a second investment to fund the annual life insurance premiums.

Many of these clients didn’t know the second investment was a cash advance to veterans through Future Income Payments, according to allegations in lawsuits. After the company failed and stopped collecting from veterans, Black Harbor’s clients could not afford the life premiums. When they defaulted on the premiums, the clients lost most or all of their money.

Mary Orem, a 58-year-old former high school librarian from Pendleton, said she lost about $44,000 that she invested with Black Harbor, jeopardizing her retirement plans.

“I worry I am not going to have enough,” she said.

Dolores Stegelin, a 72-year-old retired Clemson University professor, said she invested $105,000 to buy two life insurance policies for her children after she and her husband attended a seminar hosted by Chris Dixon at a Ruth’s Chris Steak House. She said a substantial portion of her investment vanished when Future Income Payments collapsed last year.

Stegelin said she has learned a hard lesson.

“If it sounds too good to be true, it’s probably not legitimate.”

If you believe you were a victim of investment fraud or broker misconduct, it is imperative to take action. Peiffer Wolf Carr & Kane has represented thousands of victims, and we remain committed to fighting on behalf of investors. Contact Peiffer Wolf today by filling out a Contact Form on our website or by calling 585-310-5410 to schedule a FREE Case Evaluation.